(or how to reinvent yourself after a long career) 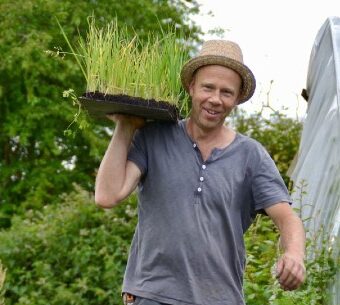 Everyone has advice for growers who are just starting out, the dos and don’ts, the little nuggets of wisdom given freely and with the best of intentions. When it comes to the closing chapter of your career, there is a lot less advice readily available. There seems to be two schools of thought, you either put your head down and keep going, or quit while you are still ahead and able to do so.

I started growing in 1992, working as an apprentice on a farm in Co. Wicklow for the early part of the season. It was enough to convince me that it was what I wanted to do, a path that I could see myself taking. At the time, most of my friends said that making a living off the land could not be done, and indeed there were very few good examples of it being done and hardly any support available for those wanting and willing to try. We got all our information from books and the occasional farm visit to other local growers. We learned by trial and error, building on our knowledge as we muddled along. The term ‘self-taught’ certainly comes to mind.

29 seasons later and it is time for me to think about getting out while I still can.  I read an article in this magazine by Brian Adair a couple of seasons ago that struck a chord with me, and I knew that I was getting closer to having to make a decision. I also knew that physically, it was getting harder to do what I had been doing. I turned 55 last month, and although I can still manage the workload, most of the time I am too knackered to do much else. So, at the beginning of this season I decided that it would be my last one growing commercially. I have been selling in Ennis Market since 1997 and have done well over 1000 markets during that time, so finishing up there is going to be a huge change that will take some getting used to.

Over the last few years, I have tried to figure what it is that is so addictive about being a grower. For me, I think it is the buzz I get from seeing a seed germinate and then develop into a fully grown plant, and it is that unique buzz that I am reluctant to part with entirely. So, rather than giving up growing altogether, I have planned a smoother and less drastic transition, a kind of ‘warm down’ if you like. For the last dozen or so years, I have been growing seed crops for the Irish Seed Savers Association who are located quite close to me here in the Midwest of Ireland. My plan is to transition into seed saving on a part time basis and see how things evolve from there. This year, I grew 15 varieties in small quantities, alongside the crops I was growing for market. I estimate that even if I double that number next year, I should still have a significant amount of free time. No more long days harvesting for the market (one harvest day this year I logged 28,000 steps using a Fitbit), or early alarm calls to spend hours standing in the wind and rain at the market. The timing also seems right, with last years seed sales up for every seed company, with some up by a factor of two.

For me, it feels like the obvious next step to take, and I am as excited by this prospect as I was when I first started growing for the market. I feel fortunate to have been able to grow commercially for as long as I did. From the very beginning, I heeded Eliot Coleman’s advice and always took time off. I have kept myself fit cycling, swimming, and walking, and prepare for each coming season as though I am endurance athlete. After all, every season is a marathon, not a sprint! When I started, I never imagined that I would still be growing in 2020. It has been a great pleasure, it never felt like work, and I never struggled to get out of bed on Monday mornings! For now ,though, I am hoping to have more time to go fishing and to perhaps cycle further afield. I am also looking forward to having a summer holiday, something I have only done once since I started. It really is the small things in life!

Finally, I would like to acknowledge a few of the people who have helped me and inspired my growing over the years. I am indebted to Billy Clifford, Deirdre O’Sullivan and Norman Kenny (RIP), Penny and Udo Lange, Tolly, Eliot Coleman (who I have never met) and last but by no means least, Joy Larkcom.

Growing was something that I fell into, but in the best possible way. My advice to anyone looking to get started would be to follow your dreams with dogged determination. It is a great way of life, very doable and most definitely worth it.