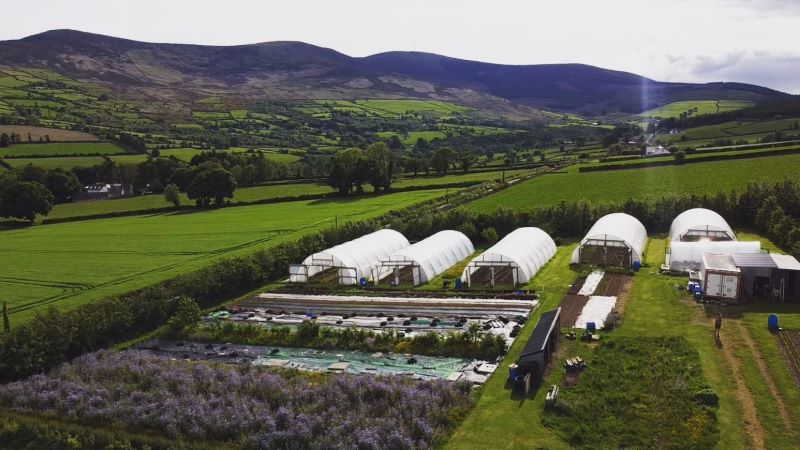 Gorse Farm is a certified organic market garden located just outside Bunclody on the Carlow Wexford border. The growing area consists of 600m2 indoor space spread across 5 polytunnels and 1500m2 in outdoor permanent beds. Commercially we focus on salad leaves, which we market through Supervalus and restaurants, along with microgreens and spinach.

The soil type on the farm is sandy-loam and consequently very free-draining. Holding on to water and nutrients was a significant challenge for us from the get-go and after the drought of the summer of 2018 we decided to transition to no-dig.

In September 2018, we converted the entire indoor growing area to no-dig by adding a 5cm layer of Enrich compost to the beds and adding woodchip to the paths. Our first winter growing season after converting to no-dig was very successful, with the expected benefits of zero weed pressure & thriving crops. The following spring/summer we followed the same approach (5cm Enrich & woodchip paths) with the outdoor growing area. The reduced weed pressure, increased water holding and nutrient dense medium made for a very good summer season.

In autumn 2019 the tunnels were again prepared with a deep-mulch compost (2.5cm depth) this time an organic spent-mushroom compost, which at the time was produced locally. This winter we did notice an increase in lettuce drop over previous seasons and occasional stunting in lettuce plants. 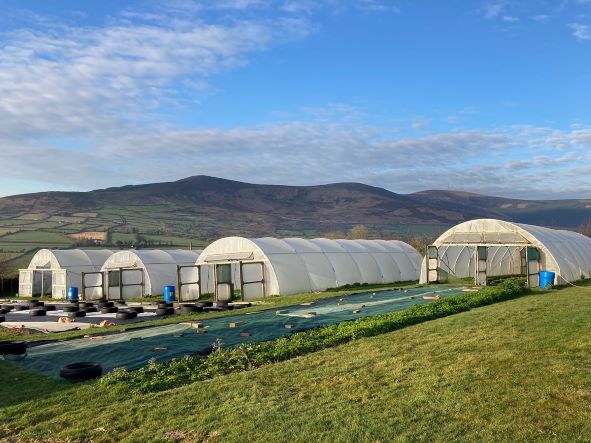 Participation in the MOPS project came with the benefit of increased soil testing and results in summer 2020 revealed elevated levels of P and K in the tunnels and outdoor beds as well as an increase in pH. High electrical conductivity (i.e. salinity) was also detected which was likely what was contributing to elected levels of lettuce drop. High phosphorous levels were of a particular concern as they were quite elevated for some of the plot tested. Phosphorous being water insoluble can be difficult to remove from the soil and can cause lock-up of other nutrients. Also of concern is its negative impact on water quality. Collectively these effects caused us to reconsider some aspects of our management program.

In the autumn of 2020, we drastically cut back our compost applications for the tunnel beds in an attempt to restore P and K levels; nitrogen needs were met by certified organic products from Fruithill Farm (Phytoperls). Plant health and productivity was adequate for the winter season and we noted reduced levels of lettuce drop.

From 2021 through to today we manage our fertility needs primarily through home-made compost, which also includes animal inputs from neighbouring farms. We constructed a Charles Dowding style compost bay system which has been of huge benefit in creating and maintaining good compost. Having good inputs at hand means we can layer effectively and numerous bays provides the space to turn compost throughout the season, which is essential in obtaining high temperatures to kill weed seeds. There is no substitute for home-made compost in my opinion, the hands-on nature of creating your own compost means you know what’s in it and can control the temperature so that the living biology is maintained. This year we have experimented with vermicast also and add the tea extract to the bulk compost as an inoculant. We have also been applying regular aerated worm-tea (with added biostimulants, fulvic, seaweed and humic acid) as a foliar application to the crops and have seen great promising results. We are also experimenting with different mixes of green-manures both in indoor and outdoor growing areas. Next year we will begin to look at Jadam, and Korean Natural farming as we continue on this journey. 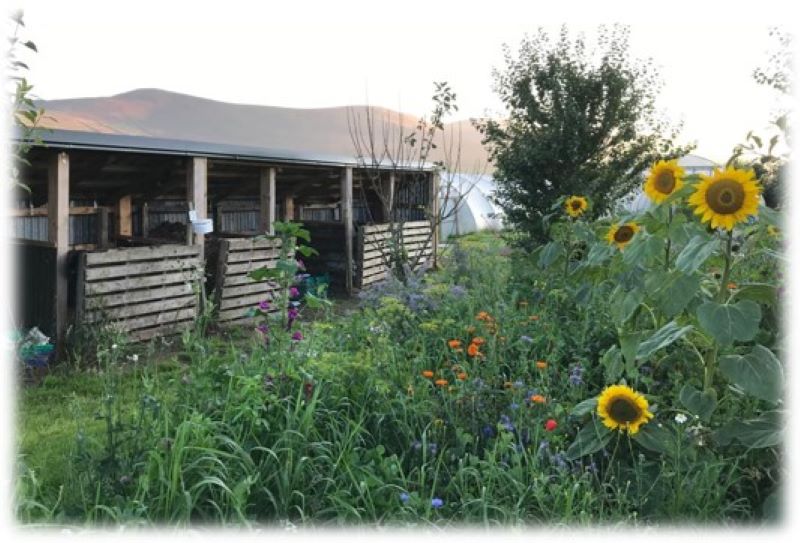 In practical terms we find the use of mypex very useful for no-dig beds. In winter most outdoor beds are under green manure but if an outdoor bed is still in production into late October we will cover it with mypex (a good tip is to weigh down netting on top of the mypex, which prevents the wind from lifting it). In spring/early summer the mypex is removed and the beds prepared by raking or occasionally we use the BCS with rotavator and PDR (precision depth roller) attachment which can be adjusted to 2.5cm depth. Compost is applied and the crop is planted/sown. When the crop is ready for termination, we mulch it with the BCS mulcher-mower, spread a light layer of compost and cover with mypex; importantly all roots remain in the soil. How quickly the ground under the mypex is ready depends on the crop and time of year but the idea is that when removed there is very little else to do with the bed before planting/sowing. We use a similar approach with green manures and also use this method when creating new growing areas from grassland.

We continue to use woodchip in our system and have had success with using semi-composted woodchip as a mulch on over-wintered garlic and onion beds and also as a mulch for tomatoes/aubergines/chillies in the summer. The benefits to the soil due to the addition of woodchip are very obvious when looking at seasoned woodchip paths, which are dark with humus and alive with earthworms.

Our approach to no-dig when we began in 2018 was primarily based on the image of woodchip paths and weedless beds. Our understanding now is that no-dig is not exclusively a ‘deep-mulch’ system but incorporates many methods of cultivation that minimise soil disturbance and keeps the roots in the ground. Moreover, our approach to vegetable growing is now centred on building soil biology, which incorporates many methods, one of which continues to be no-dig.