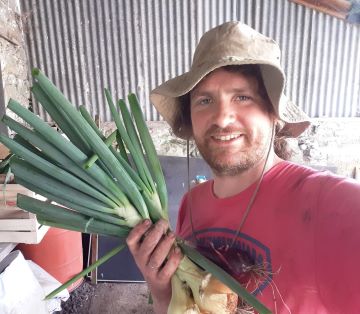 We began with a jungle, a half-acre overrun by almost three decades of neglect. An invasive thicket of bamboo vied with aggressive regiments of thistle. Beside the half-dead orchard, gnarled with nettle and ivy, broken-down fencing stitched the soil. Seeds long ago deployed haphazardly in blobs of bird-shit were now full-grown trees of thirty feet or more.

I yanked the pull-cord on the strimmer and set to work. I borrowed a chainsaw. The thick carpet of wilderness gradually gave way to a Nowhere Land of bare soil.

The rain fell. Family and friends paid a visit and raised their eye-brows at the swirl of mud. There were days I wondered whether our vision of a flourishing garden was not some kind of Quixotic fantasy, the dream of a fool.

But we pressed on. Our first polytunnel was installed on the blank, brown canvas.  Slowly, beds were formed. Crops were sown.

Three months later, we bagged our first produce – three salad bags, a clutch of kale leaves and two heads of lettuce – all of it displayed on a blue Fisher Price table we borrowed from my two year old daughter. We erected a parasol to keep the summer sun off our crops. Nervous the lettuce heads would wilt, I floated them in a steel bowl of water.

A kindly neighbour showed up and spent three euro fifty. It was our first sale.

That was just over two years ago. Now, it is early May, and the rain is gullying down the transparent skin of our third polytunnel. I am wrestling with a coil of irrigation pipe, slowly rolling it out between vulnerable cucumber stalks and tomato seedlings.

Five minutes later, and the sun is warming the tunnel to an oven. I step outside to transplant a tray of leeks. Now, a sudden burst of hail. I retreat, once again, to the shelter of the tunnel and listen to the loud snare-drum rattle of the storm.

Our schizophrenic summer climate means gardening is never dull. A touch of late frost has finished the runner beans and bruised the cucumbers. The spring cabbage – nursed through winter – has inexplicably run to seed. The same goes for an early sowing of beetroot in our smallest tunnel.  At the outset of our third-ever season, I am still a learner.

Tomorrow is Thursday. In the morning, we will harvest the leafiest crops, including our salad leaves, and spend the rest of the afternoon filling veg boxes for our 20-plus customers. An old shelter in the yard serves as a packing shed. This early in the season, with our yields on the lean side, we buy in potatoes, leeks and parsnip.

Once the boxes are jammed with fresh garden produce, we will load half of them into The Veg Shed. This old pump house, built of breeze-block, with a corrugated tin roof and a refurbished door made of pallet wood, serves as our onsite pick-up point.

I will load the remaining boxes into a borrowed van and drive them to O’Briens Pub & Grocer in the heart of Athy. O’Briens is one of those uniquely Irish relics: a genuine pub-shop.  A smorgasbord of everyday necessities – light bulbs, dog food, shampoo, Barry’s Tea, tissues, fire-lighters – clutter the shelves behind the till.

Frosted saloon doors divide the shop from a dinky pub in the rear. I will carry the veg boxes through the pub, down the back hall and out into the shelter of an old cabinet in the rear yard. There they will sit until the customers file in to pick them up.

Judith runs the show. She ventured home from New Jersey USA to run the family business, taking over from her late father. We will swap the chat as I stack a few of our surplus salad bags into a fridge between the Lucozade and sliced ham. Over the course of a week, Judith might shift five of them, at €2.50 a pop.

But all of that comes tomorrow. There is still much to do today. I sink the tongs of the garden fork into the soft soil and tug up a slender stem. Roots pop with the pong of fresh green garlic. Twenty-two veg boxes to fill and a bundle of three for each will do nicely.

A recent dose of compost tea has boosted the spirits of our purple sprouting broccoli. I snip at the florets with a scissors and slowly fill a crate. I heft the load and estimate it at a kilo and a half.

As I work, I juggle numbers in my head, puzzling out how to divide the harvest amongst our customers. Eight large boxes, seven medium boxes, seven small boxes: the weekly yield must be divvied up between them.

There is no great science behind it. I pull my Smartphone from a pocket, rub a finger to clear the muck-smeared screen, and open Google Docs to check my list of who’s getting what. I tapped the list out this morning.

It’s a rough art, dividing the harvest. I never planned on beetroot bunches this week but now our early beets are rushing to seed, I either improvise or lose the crop. I pull seven plants at a go and bunch them with elastic bands. The candy-cane stalks fan out in brollies of vibrant green leaves, all of them ribbed with blood-red veins.

Every week I dispatch a brief video to our customer WhatsApp group. A one-take wonder, the Smartphone shakily held out in one hand, while I gabble about the garden crops in the box. I make a mental note to Google the benefits of mini beetroot, as well as the fresh young leaves. This week, I’ll make a feature out of them.

I’ll remind our customers of the seasonal journey. The way diverges from the polished predictability of the supermarket aisles. Instead of trolleys, strip-lights and predictable sizes, the smell of soil, the ooze of health, the surprising textures of fresh-picked veg.

I carry my haul of piquant garlic, green broccoli and bunched beetroot back to the shade of the packing shed. The sun hides again behind a grey wall of cloud. Soon the heavy drum-beat of rain sounds on the corrugated roof.

I retreat to the kitchen for a warming cup of coffee. While the kettle hums to boil, I stand by the window and watch the dark earth drink the falling sky.