Seeds for the Future 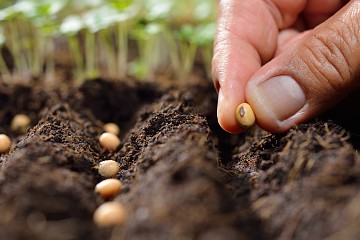 Seeds for the Future

The pandemic has been a time of huge upheaval, but from that upheaval, new opportunities have arisen. For example, growers have benefitted from an increased demand for fresh and local food, with sales figures for organic produce rising across all outlets. Just last week, the Soil Association announced a massive 12.6% increase in the sale of organic food.

One issue that has been catapulted front and centre is that of seeds and seed production. Across the board, there has been unprecedented pressure on seed suppliers, and this is creating a myriad of problems. Growers are finding it difficult to get orders in, and there is also a risk that orders may not arrive on time. In Ireland, there is the added problem of not being able to buy seeds from our traditional market, the UK, because of the phytosanitary regulations brought about by Brexit. This works both ways, meaning that UK suppliers are having problems importing from the EU and this will also increase costs to growers.

Seed companies are struggling to cope with the level of demand from home gardeners and commercial growers. Some are only opening their websites for a couple of hours a week, finding that once they do, they are inundated with orders to the extent that it then takes them a week to process them all. This may seem like a good thing in the short term (last Autumn the Seed Coops sales were up by a factor of 6), but if this continues in the long term, seed companies could encounter problems. If demand stays high over the next couple of seasons, stocks will become depleted leading to future, widespread shortages.

As growers, we need to be aware of this and assume some responsibility to ensure that this does not happen; it is, after all, in our own interests. It is not enough to say that it’s someone else’s job when at the end of the day, it will have an impact on our livelihoods.

Growers have always prided themselves on the sustainability of their sector, but in recent times, instead of prioritising the growing of seeds, we have abdicated responsibility for their production.

I have been growing seeds alongside market crops for over ten years. I haven’t done it on a big scale, usually only four or five varieties a year, but it has been enough to give me a sense of the benefits of doing so. My motivations for starting this were many and varied and included some of the reasons outlined below.

At the time, the growing of seeds was not of commercial concern to me, with the sale of market crops being more important financially. However, I knew that that could change very quickly if there were ever a time of increased demand and supply shortages, such as that which we are experiencing now.

Growing a crop for seed requires the same level of care and attention to detail as that required when growing a market crop, the only real difference being that they are not harvested on a weekly basis like market crops. More than likely, they will be harvested in three of four pickings over the course of a month, which means there is less work involved in terms of harvesting. If you are a competent grower, you should be able to grow good seed crops. However, there is a lot to learn about pollination, isolation distances, selection, populations, and optimum harvest times before you can begin. Furthermore, the processing and drying of seeds is a critically important part of the process and techniques vary for each crop. The final quality of the seed will determine your success, you will never grow a good crop from poor quality seed.

The Gaia Seed Sovereignty programme is currently running some online training in seed saving. Real Seeds have run courses in the past and have a network of smaller growers growing for them. Seed Coop are actively looking to increase the number of growers they have growing seed for them, and in the past have run courses from beginners’ level right up to advanced.

Once you have saved seed and seen the crop you can go on to produce using said seed, you will wonder why you had never done so before. Germination, vigour, health, yield and many other traits can all be improved upon by growing and using your own seed, and over time your seed will adapt to both your soil type and your microclimate.
It feels right to be taking a bit more control of our food system, by making organic growing more holistic and by taking more responsibility for something that, let’s face it, is the most intrinsic and important part of our system. In a way, seed saving is an investment in future generations of seed and growers. What better legacy to build on during these turbulent times?

You may say that I am a dreamer, but I’m not the only one.

Postscript
Since writing this I have been employed by The Gaia Foundation to work on their Seed Sovereignty Programme in Ireland. The programme started in 2017 to support a biodiverse and sustainable seed system in the UK and Ireland. My focus will be to increase the production of seed by commercial growers on this island. With that in mind I will in the months ahead be talking to growers, processors, and seed companies about building capacity for Irish grown seed.
I would hope to organise some visits and farm walks over the summer once restrictions allow and start some trainings at the end of the season. If you have an interest or would like to get involved contact me at irelandseedsov@gaianet.org