Growing in a glasshouse 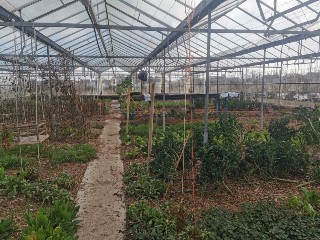 2021 is year 9 for me as a market gardener, another ‘year like no other’. It is at this time of year that spending the vast majority of my working days inside a 34m x 16m glasshouse pays its highest dividends. The naturally short days of winter and early spring with their low light and temperature conditions make it the most challenging season for growing the majority of commercial crops. All the more reason why this is a time where every ray of light is to be let shine down on any indoor crops .
Another positive of glass over polythene includes the potential to have better ventilate through the roof vents/windows as opposed to gable ends of a polytunnel or side venting which can compromise the lifespan of polythene.

Another positive is that there no need to replace the glass unless it is broken. Polytunnel plastic typically has a lifespan of 10 years or so depending a lot on exposure to the elements and the amounts of surrounding trees/large shrubs that are surrounding it. Glass is stronger than plastic in being able to resist strong winds and it will last as long as something/one doesn’t break it.

Cons include being approximately 5 x times the cost as polythene. More groundwork and a slower and more dangerous construction task. The glass used in virtually all standard commercial glasshouses is usually 3 to 4mm thick plate glass that when it breaks, it breaks into shards.

The temptation to test your stone throwing accuracy for our younger folks is certainly something to consider in relation to siting of any glasshouse particularly. 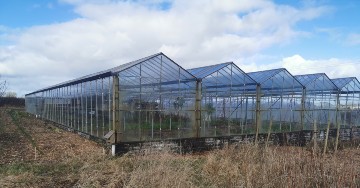 If heating is a consideration, then glass affords an option to heat and retain warmth better than a polytunnel. However, the option exists to create a bubble wrap inner layer within a polytunnel and heating within this is an option, albeit with even less light that is further diffused by the multiple layers…

Insurance was examined but ultimately, I decided to roll the dice with the structure relatively exposed in its first few years while outdoor tree hedges established. Storms have blown in one or max 2 panes during some severe storms and consequently blow out another one or two panes to release the pressure…. So, a couple of panes of glass have not amounted to a fraction of the insurance premium quoted…
Having had a 100′ polytunnel for the first 4 years built by Polydome in Birr, Co Offaly , I adored my time in there. Until we finished work on reconstructing the glasshouse in late 2016 and then like St. Paul on the road to Damascus, there was no going back to lounging casually in the polytunnel on a Sunday or whenever else might allow it…. The glasshouse is so connected to the outside world
The aesthetics of the glass are wonderfully connective to the outdoors which hopefully to most Growers will be outdoor cropping. A major consideration for me is that I am looking outside to see the outdoor garden beds, trees, birds and weather.

While ‘glass is class’ ultimately, I would advise against the financial and time commitment that a large glasshouse would demand…. at least until you’re up and running for a few years and can afford those aforementioned costs. But others have sourced second-hand glasshouses via The Netherlands that can constructed and perhaps if your budget can afford it, this is a good solution.
I hope this is of some help to people considering which protected cropping option best suits them. Keep up the good fight in the best/most important profession that exists today!